kuulamispunkt (listening point) is a mobile social sound installation, which appears in various locations around a city or town, usually in the context of a festival or other city-wide event, presenting hidden and not-so-hidden sounds to passersby in the form of an information booth. all sounds are live and location-specific. although not necessarily the original intention, the installation also creates a condusive environment for interaction and play, and many participants find themselves actively seeking the source of sound and exploring how their actions can affect it.

the first iteration of this installation happened in tartu, estonia during the UIT festival in august, 2016. the listening point appeared in nine locations over four days and served hundreds of listeners. below you can find a gallery of images from these locations, and a short recorded excerpt of the sounds discovered there. 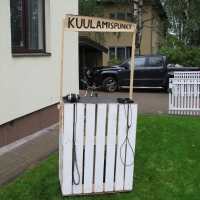 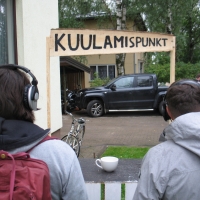 the inaugural location for kuulamispunkt was in the front garden of the house hosting the UIT festival’s opening night concert. microphones were placed inside a 50mm drainage pipe sunk into the grass. 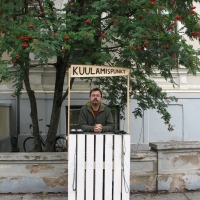 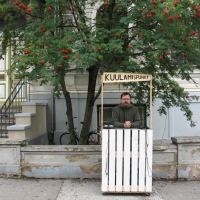 the second location was in the city center, outside the estonian writers union, under a rowan tree. contact microphones were placed in the tree, picking up the movement of the branches and the resonance of passing traffic in the wood. 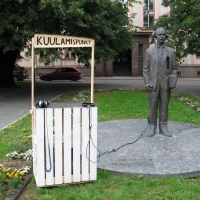 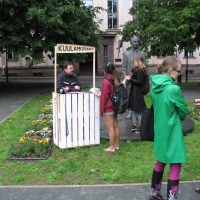 the third location was next to the statue of peeter põld, a 19th-century estonian scientist and pedagogue, which is alongside a major road along the river. binaural microphones were placed in the statue’s ears, giving the listener a perfect stereo image from the statues perspective, and an idea of the noise peeter has to put up with all day and night. 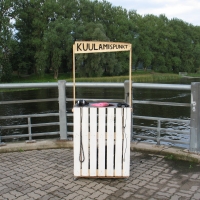 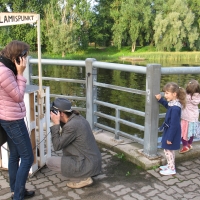 the fourth location was along the river, listening to underwater sounds from one hydrophone mixed with the resonance of the riverside metal railings captured with a contact microphone. 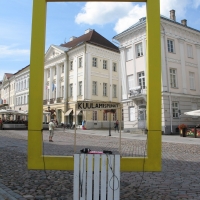 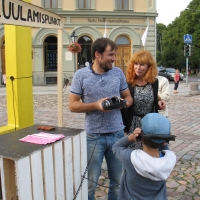 the fifth location was on tartu’s townhall square, with contact microphones attatched to the large yellow frame put up to highlight to scenic view of the square, but the hollow metal structure provides a hidden unexpected amplifying resonance as well. 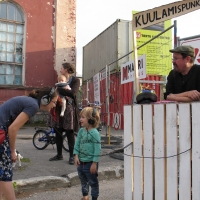 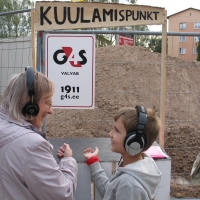 the sixth location was outside one of the festival venues, alongside a contruction site. omnidirectional microphones amplified the resonance inside the site’s safety fences. 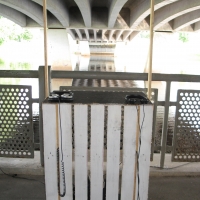 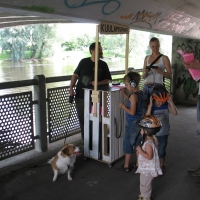 the seventh location, on a very hot sunny day, was in the cool shade under a bridge along the river, with a pair of hydrophones capturing boat movement, dripping condensation, and some underwater life. 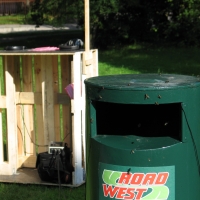 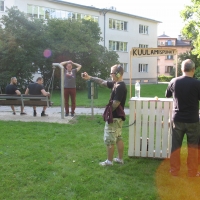 the eighth location was in a small park on a quiet street, where the public trash bins buzzed with life in the summer heat. the shape of the bins also resonanted the ambient sound, causing one listener to describe what she heard in the headphones as a ‘nightmarish science fiction cityscape, in a city of flies.’ 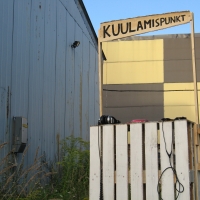 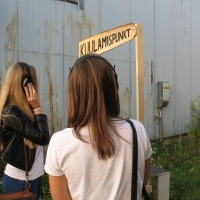 the final location was at the site of the festival’s final performance, in an old industrial yard on the outskirts of town. here a magnetic coil picked up signals from the nearest building’s electrical installation.